It takes a toll

A couple quick questions for you: Has the world gone to shit as much as it seems to have gone to shit? Or does it just feel that way because the shit is constantly in our faces?

I tend to think it's a bit of both. Sure, we're inundated with negative, mostly useless information every waking moment. But you have to be blind to not notice the world falling apart at increasing speeds. Weekly mass shootings, rising temps creating angrier weather, crooked politicians doing everything in their power to take a seat at the dictator's table, and a split down the middle of the country that gets wider every day. What happened to us? And what happens from here?

It's hard to get away from the negativity and nonsense. The constant noise from social media, the non-stop depressing news with a revenue-driven slant, radicals with huge platforms, so many talking heads with nothing to say, too many who can't see more than two inches in front of their own noses.

It all takes a toll. Especially when you're an over-thinker.

My perspective on life has changed. I'm angrier than I used to be. I have this constant feeling of helplessness, knowing there's only so much I can do to change things. Friendships have ended over a difference in values. The inability to see eye-to-eye on important issues has created family tensions. I used to be a somewhat social guy, now I'd rather just sit home and watch sports by myself. I was once much funnier, now I'm a lot more bitter. Back in the day I saw more gray, now I have a hard time budging from my own point of view. I used to give people the benefit of the doubt, now I only trust a few. I assume things I shouldn't about complete strangers. I draw conclusions based on zero facts.

I hate it. But I can't seem to shake it.

It changes us. At least those of us paying attention. It either pushes us to want better, or reprograms us to not care. If you're in the "I just ignore it and live my life because none of it impacts me anyway" crowd, congratulations on your ability to shut it all out. Also, you're naive. And selfish. And way more privileged than you care to admit.

You don't have to overthink it like I do, but come on, at least act like it matters. Because it does.

It directly impacts every single one of us. Some get hit harder than others. Those who get the worst of it are those already struggling more than they should. But go on with your apathy. If it makes you feel better to know somebody else has it worse than you, than you do you. The rest of us will figure it out without your input.

(And that's the end of that rant. Back to the point I was originally trying to make before I so rudely interrupted myself: I'm tired of this bullshit.)

As I was saying... people with money and power have zero accountability. Those pulling the levers control our daily lives. I'm not cool with that. Bad people get away with bad things. The part that really bothers the shit out of me — we keep trying to vote those bad people in so they can keep doing bad things. It's not necessarily the bad people, it's their cult-like following. Again I ask, what the hell happened to us?

There's not a lot I can do about any of this, other than blog about it. And vote. And maybe run for office someday. I have considered that last idea, but not sure I want my dirty laundry aired for my small town to see. And, how am I supposed to sit home and watch sports by myself if I'm out there trying to drive change in my community? I'll think about it and get back to you. Alderman Schultz does have a nice ring to it.

Last thing I'll say, for now: Please, please, please! don't tell me to stop posting about it, writing about it, or worrying about it. None of those three things will ever happen. This is how I deal. We all have our coping mechanisms. Some dwell on it. Others ignore it. Ignoring it is, in my opinion, one of the weakest methods of coping, but a method nonetheless.

I can't and won't just sit back and watch. My overthinking approach comes with a hefty price tag. But it's a price I'm willing to pay if there's even a half percent chance I might make a difference. It might sound corny, but it is what it is. Don't like it, ignore me.

Now, leave me alone. I'm gonna go sit in the Pick 'n' Save parking lot and try to guess the political leanings of people I've never met based solely on how they look. Then, I'll probably come home and watch a baseball game. By myself.

It takes a toll. 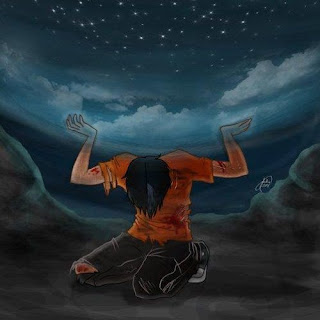