Hair metal is underrated. Don’t knock it til you try it.

I saw some old-school “hair metal” bands from my youth last weekend. They’re washed up has-beens now, older and more bloated, relegated to the county fair circuit, but as far as I’m concerned, they can still bring it — kind of.

As luck would have it, we actually got to meet the bands. Right place, right time, knew the right people kind of thing. They were all super nice guys. Probably stoned to the bejesus, but who cares, they were cool as hell. They seemed appreciative/apprehensive that two guys in their early 40’s were so pumped up to hang out. I told them I used to get laid to their songs in my 1980 Dodge Omni. They thought that was pretty cool too. I think. 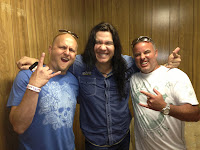 They posed with us for a bunch of pictures and humored us with some “devil horns” for the camera. (For non-metal heads, that’s the thing you do with your hand, two middle fingers down, index and pinkie up, looks like devil horns… whatever, sounds weirder on paper than it actually is. See photo.)

For reasons discussed in an earlier blog post, I immediately posted the pics to Facebook. I knew I was setting myself up for a bit of ridicule from the people who just don’t understand the power of the metal. And I probably looked like a cheeseball, or a guy who can’t quite seem to grow up all the way. But that’s ok. Because I am those things.

I say be you.
Life is too short for overthinking what other people think about you.  Let your hair-metal lovin, rock-n-roll freak flag fly! Or whatever kind of freak flag you’re flying these days. Do you and do it well. I’m getting better at it every day. It takes time. Takes some of us longer than others. Maybe I’ll get it all figured out when I grow up all the way. That might be a while.

Rock out with your devil horns out!
JS
Posted by Jason M Schultz at 7:57 AM