Six Words Can Say So Much

Nah, just kidding. I’ll stay away from that one, at least for now. Don’t want to piss anybody off, yet. It’s tempting though…

I’ll stick to a more neutral, controversy-free subject at this stage in the blogging game. We’ll see how long that lasts. 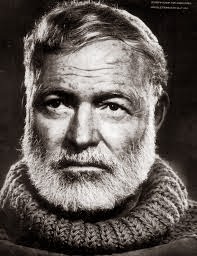 A couple of weeks ago I gave a presentation at work called “6 words can say so much.” The whole idea behind the presentation was to show the power of words and how much you can say without saying much.

Legend has it that the six-word story idea started when literary giant Ernest Hemingway was bet by his colleagues that he couldn’t tell an entire story in just six words.

Pretty powerful stuff don’t you think? Needless to say, Hemingway’s buddies paid up and he’s said to have considered this some of his best work.

So, feeling inspired, I came up with a bunch of my own six-word stories. It’s the whole “less is more” kind of thing. And it’s a good way to get stuff out of your head and down onto paper.

Here are some six-worders from my presentation:

“At your weakest, you’ll find reason.”
“Pull yourself together, or fall apart.”
“Always searching. Not sure for what.”
“I still think of her, often.”
“Stop looking out. Start looking in.”
“Live this moment, not the next.”
“Life is tough. So am I.”
“Music keeps me from breaking things.”
“What’s the worst that could happen?”
“Only you can prevent forest fires.”

Less can definitely be more when it comes to saying what you want to say. Give it a try. Make up funny shit. Make up senseless shit. Talk about what’s going on inside. Create some motivational mantras — whatever you feel like saying, say it in just six words. Write it down, look at it and think about what it means.

See how much you can say. Let the words tell a story.
Let me know how it goes. I could do this all day.
JS