Only so many fucks to give.

Editor's note: Fuck it. I need this blog. I've been away too long. I don't even care if anybody reads it. I need it. So here's a new post.

Seriously. It's been a rough go for too long now. And when you're an overthinker, all the noisy bullshit is extra loud. Conspiracy theorists, insurrectionists, pandemics, anti-vaxxers, talking heads and dumb asses in general. It gets to be too much and eventually wears one down to an emotionless nub.

I'm angry and sad and anxious and scared. But at the same time, I'm running out of fucks to give.

I want to do so much to make things better but instead of taking action another day passes and I do nothing. Partly because I don't really know what to do. Partly because it's easier to sit back and bitch about things then it is to get off my ass and do something about it. But mostly because I'm starting to not care nearly as much.

It wears me out.

Those who overthink will understand. We can't let things go until we've fixed them. But not all things have a fix. So, we end up running in place and punching the air, draining our soul in the process.

In my case, I end up spending too much time on social media, pouring fuel on an already raging fire. I want to physically fight every meathead online who believes whatever they're told except the stuff that's worth believing.

It's the very definition of insanity.

I thought things would get better with a leadership change. They did, but it's still bad. The far right is even more fired up now. "Stop the steal!" "Fauci lied!" "What about my freedoms?!"

My friends list is much shorter these days. That's not necessarily a bad thing. Sometimes cutting your losses is the best move. But it still hurts. Because I know I can't go back to where things were. It's about values. And respect. Once you lose respect, it's over.

It's sad. But necessary.

We sacrificed most of 2020 to give ourselves a chance at a better 2021. We stayed home. We wore masks. We stopped going to Pizza Ranch. We listened to science. And it worked. At least for a while. Now, because almost half the country is either selfish or foolish, or selfishly foolish, we're headed back to where we were.

Here's what I think: Never stop fighting for what you think is right. (Unless you think it's right to be racist, you're certain JFK, Jr. is still alive, you believe the vaccine is jam-packed with microchips, or you're adamant the election was stolen even after 275 recounts proved it wasn't. If you believe any of these things, knock it off. Stop being an asshole.)

The key: Keep fighting, but pick your battles. Give yourself a break, but don't give up. Decide what to give a fuck about. Too many and your bucket overflows, drowning you in fucks. Not enough and eventually your bucket will empty. And an empty fuck bucket is an empty life. 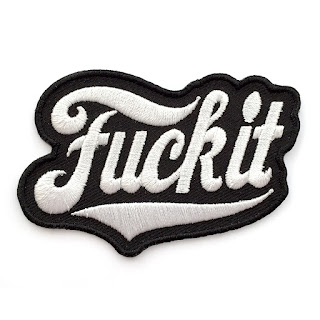