America, I have questions.

I'm tired of it. I'm done. I can't do this anymore. This is bullshit and most of you know it.

If you follow me on social media, you're well aware that I've never held back when given the opportunity to share an opinion. It's who I am and how I deal. I've pissed people off. I've lost friends. I've gained new ones. This post will probably alienate the already alienated even more. Sorry about that. Kind of. Mostly, I want to understand some things better, get some of your wheels turning, and maybe even change a mind or two.

But if none of that happens, at least I'm getting some stuff out. It's the therapy I need right now. It's been four years of this horse shit and I've had enough!! I never thought I'd let politics dig its claws in this deep. But it has. And I blame Trump. Which really means, I blame us. Because we did this to ourselves. But I know we can do better.

Spoiler alert: If you're a true Trump lover, you might want to stop reading right now. Because I'm gonna let some shit fly. This ain't no Facebook post. This is an all-out, no-holds-barred rant and release.

And here it goes.

For the ever-fucking life of me I can't figure out how 40% of the American population can still support the assclown currently sitting in the oval office. I'd have a hard time figuring out how even one person could, but 40 fucking percent?! Come on! What happened to us? Are we so tethered to our personal, political and religious beliefs that we can't be human long enough to see more than two inches in front of our own faces? Are we really this biased, racist and empty of empathy? Are we really this dumb? Or blind?

I believe in a two-party system. This country needs both Republicans and Democrats. I'm not here to belittle anybody for their support of a particular party. Both parties have their issues. And both parties have their share of lifelong politicians who either stopped giving a shit or never really did. This rant isn't about which end of the wing you choose to live in. This rant is all about Trump.

So, without further ado...

Trump has zero — and I mean zero — redeeming qualities. He lacks any and all leadership traits. His incompetence is mind-boggling. He can't string a coherent sentence together much less come up with a plan to lead a country. He's a bully. A narcissist. A racist. And quite possibly, a sociopath. He's crooked as the day is long. He's a con who will do whatever it takes to benefit his own. He's incapable of the job he's in. And what's worse, has no interest in becoming capable. He's a horrible businessman who tries to run the country like a failed casino. He's a pathological liar, a chronic cheater and shitty golfer. And he tweets too much.

And that's just the stuff they can prove. He's shown us time and time again who he is and what he's willing to do to get ahead.

So what is it? Why are there still so many, some whom I've always considered good human beings, still planning to vote for this asshat?

Seriously. I want to know.

Is it all about the 401K? Are some so concerned their retirement might take a slight hit that they're willing to throw every ounce of human decency and integrity out the door? Does the stock market really mean that much to them? Do these people even know how the stock market works? Will money really matter if we give up who we are just to have a little more?

Sure, taxes might change under a Democrat. That's how it works. But are enough of us really that impacted by those changes? If you make over $400,000 a year, congratulations. I mean it.  You deserve every penny. Especially if you worked hard for it. Sure, your taxes will go up, but you're still gonna make a shitload of money. Are you so afraid of losing a few bucks that you're ok with four more years of this shit? Maybe if I was one of the one-percenters I'd understand. But I'm not. And neither are most of you.

Is it about abortion? I get it, it's a tough issue. Even for the non-right-leaning crowd. But is supporting a misogynistic pig who's probably paid for several abortions himself, the answer? I'm not big on religion, but I did grow up in a God-fearing household and went to eight long years of Catholic grade school, so I know a little bit about what being "Christian" means. Treating others the way you'd like to be treated is one of the biggest tenets of being a good Christian. Pledging your loyalty to a guy who is anything but Christ-like, feels more than a tad hypocritical to me. Besides, the abortion laws aren't going anywhere anytime soon, even with a Republican in office. So, help me out here. How can you follow Christ and still vote for this douche? Makes no sense.

Is it about patriotism? Am I un-American because I don't support the POTUS, even if the POTUS is a shitty human being? I don't think so. I appreciate everything I have, and I realize I might not have these same things if I lived somewhere else. But goddamnit don't tell me it's my duty as an American citizen to respect the office. Fuck that. I was brought up to respect those worthy of my respect. Trump isn't even close to worthy. Come at me with something else, because that one ain't gonna fly. And please, stop with the "my president" bullshit. It's embarrassing.

Are we even more racist than I want to believe? Do we really think that white people are superior? Do we seriously want to do whatever we can to make sure that privilege stays intact? How do so many of us not see, or care about, the bullshit that goes on around us every single day? We're all just people living on the same big planet in an incomprehensibly massive universe. We all matter. And at the same time, none of us really do. It really is that simple. You, me, nobody, is more important than anybody else. We're all in this together, like it or not. It is what it is. Someday, every single person on the face of this floating rock will be dead and gone. Shit, some day the floating rock will be gone. If you think you or your country are superior in any way, you're foolish. So stop it.

Is it an anger thing? Do some voters want him in office because they like the way he stirs shit up? Would they be lost without that anger? I know I'm guilty of wallowing in my own mire now and then. I've occasionally been too comfortable with my own pain, and there have been times in my life I thought I needed that pain because at least I was feeling something. Letting go of that "something" isn't easy. Maybe the way Trump fuels the flames is reassuring to the really angry. Maybe he justifies what they feel. Or, maybe some people are just big enough assholes that the only guy they can relate to is another big asshole.

Are we dumb? Maybe a big part of our population isn't that smart. I have a feeling that a major chunk of his base has no idea why they support the guy. They probably couldn't tell you one thing he's done for this country, or for them. The sad part — so many of those standing behind him are exactly the people he cares the least about. The guy with no teeth, no job, a truck that doesn't run, living on a paltry disability check because his left leg went south, and sporting a MAGA hat over his flowing mullet, is the last guy in the world Trump cares about. But that doesn't seem to matter. Trump is his man. Maybe the confederate flag hanging from the front of toothless Tom's trailer is the only answer we need.

Is Biden the problem? We went through this in 2016. Let's not do it again. I get it, Joe's not a perfect candidate. There's no such thing. And I realize most people vote along preferred party lines. But can't we make an exception this one time? I happen to believe Joe will make a pretty decent president, because he seems like a decent dude. And he's temporary. I had a friend put it perfectly: "Joe isn't necessarily the vehicle of the future. He's just the guy driving the car out of our current hell." That's it! Can't we all just get in the damn car, get out of hell, and hope for better down the road? Joe might be boring and predictable. But boring and predictable sound pretty fucking good for a while. He won't fix everything exactly the way we all want it, but he certainly won't continue to break shit at an alarming rate.

Are people just shitty? Maybe more of us are just bad human beings than I care to admit. Nobody's perfect. Especially me. But I want to believe that most of us are good. Good people can't really want more of this, can they? Is it just me, or has the number of shitty people gone up the last few years? Maybe Trump gives people an excuse to be the shitty person they've always been. There has to be more of us than there are of them. I refuse to believe anything else.

What else am I missing? I truly don't get it. I want so badly to understand. Support who you want, but tell me why. There's gotta be something in you that makes it ok to vote for another four years of this. If this comes off as self-righteous, so be it. I want to believe that all decent human beings know what a decent human being is. And Trump ain't it. Simple as that. And stop with the "But Joe did this..." Nope. Not even close. And save your "I don't need my president to be my moral compass..." Also, nope. I think the last four years have proven that a leader of an entire country needs to be a good human because they set the tone for the entire country. Period.

I can tell you with every ounce of who I am, that I don't think we'll survive another four years of this. And that's not hyperbole. Now, I'm not saying the world will literally end. (At least I hope not. The Brewers haven't won a World Series yet.) But I do believe the country as we've come to know it, or always hoped it could be, will end. Another four years of this brokenness might not be fixable. I don't care which side of the fence you're sitting on, none of us should want that.

Let's do better, America. Please. The way things are right now, better shouldn't be that hard to do. 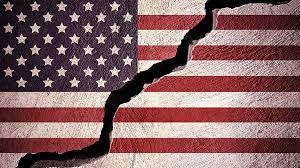