I am not the devil.

So the other day was Easter and it got me thinking about religion and self-righteousness, again.  I’m not a religious man — I’ve probably mentioned that more than a time or two. But that doesn’t mean I’m the devil.

Unfortunately, not everybody agrees with me on that.

According to the small minded, because I don’t believe what they believe, I’m going to hell — whatever “hell” means. And because I don’t have the capacity to forget everything I’ve ever learned about science and buy into an irrational theory that the earth is only a few thousand years old, that must mean I’m satan. Makes perfect sense doesn’t it?

This irritates the holy shit out of me. For starters, I’m extremely frustrated by those who choose to ignore the provability of science because it doesn’t fit their convictions. But I can get over that because it’s not up to me to say what people can and can’t put their faith in. What irks me the most is their all-knowing, judgmental approach to the dirty non-believers. Fuck off.

I admit my disdain for their arrogance is a bit hypocritical. Case in point: I thought about posting some funny, yet intelligent, anti-religion stuff on Facebook on Easter Sunday. (George Carlin has an awesome and hilarious take. YouTube it. It’s really good.) But I didn’t. Even I thought that was a bit too much. I realized I had too much respect for traditions. And I didn’t want to ruin anybody’s Easter dinner. Ham is delicious.

I want so badly to retaliate when I see “Jesus has Risen. Rejoice or Repent!” or “Thank you Jesus for saving all of us sinners!” posted all over Facebook. First off — let me say 'thank you.' These people apparently know that I’m a sinner. I’ve been wondering about that. Now I know. I’ll try harder.

What I don’t appreciate is being lumped into other's viewpoints and then having their bias advertised to a great big social media audience made up of more people who don’t share their beliefs than do.

Sure, it’s their right to shout their perspectives from the digital mountaintops. But oh Lord Jesus watch out if I decide to do the same! I'd be banished from their social media circles! I'd get blacklisted, shamed and bound for eternal damnation to a place where it’s always really fucking hot and the only choices on netflix are Kevin Costner movies.

Enough. I’m not an evil guy. So stop telling me I am. Worry about yourself and your inability to see beyond your own fears.

What I am is a good-hearted person with an open mind and a willingness to admit I don’t have all the answers. Because none of us do. We can believe that we do, because it’s our right to believe that we do. But we don’t.

So I guess what I’m saying is — if it’s ok for you to call me a sinner and tell me where I’m going, don’t be surprised when I tell you where to go. I’ll try to respect your point-of-view, if you’ll try to respect mine. Because that’s all they are — points-of-view in a world full of them. 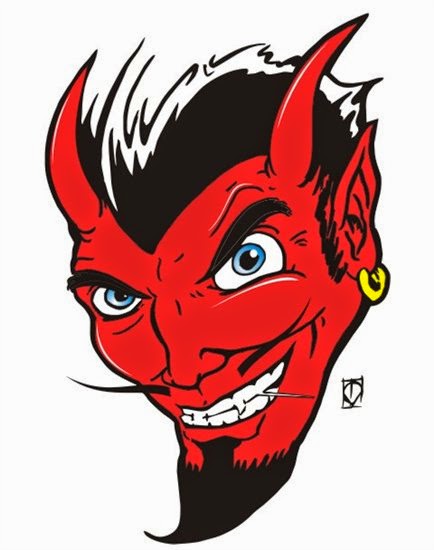 Oh, and unless you’ve been to hell and can prove it with pictures from your iPhone or a souvenir coffee mug from the gift shop, don’t tell the rest of us that you know how to get there. Besides, maybe it’s not all that bad. According to the know-it-alls, most of my friends and family will be there too, and guitar-driven, double-pedal bass drum devil music will be playing in the background, non-stop.