I love music. Good music, not the kind that sucks.


I’ve always been a huge fan. When I was a kid, I had a boombox with a cassette recorder. I used to stay up late and record songs off the radio — if I could get a station to come in. I had to always be ready with my finger on the stop button, afraid the DJ would jump in before the song was over. It happened almost every time. I had stacks of cassettes filled with the latest and greatest radio hits ruined by late-shift DJ wannabes cutting in too early just to hear themselves talk. 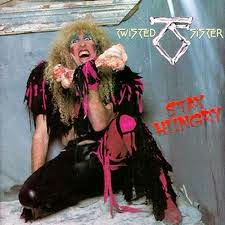 In grade school, I got into bands other kids either didn’t like or weren’t sure they were supposed to like. Bands like The Police, Twisted Sister, Quiet Riot. I wore my Synchronicity cassette out. Loved that album. Had it on vinyl and cassette. Still do.

And I remember how cool I felt when I got the new Twisted Sister album, Stay Hungry, for Christmas of ’84. I took it to school to show all my friends the scary album art. Sister Irene wasn’t impressed. Apparently it was devil music.

In high school, I had a piece-of-shit Dodge Omni that wasn’t worth much more than $400. But the stereo rocked. I’d crank bands like INXS, Steve Miller Band, The Outfield, and of course, the mighty Van Halen. I’m proud to say I was more of a Hagar fan than a Roth fan, but they both hold their place in music lore.

I thought I was pretty cool back then. I really wasn’t. But it was the thought that counted.

As I got older, my love of music just got stronger. Everything from the classics to hair metal, classic metal to alternative. There’s so much good stuff out there. And it’s so much easier now to access it. I try to stay up on the new bands these days, but I keep going back to the tried-and-true, like the Foo. One can never get enough Foo.

One genre that never grew on me — new country. Can’t listen to it. Kenny Chesney — now that’s the music of the devil to me. Pure hell. Toby Keith — I’d rather stick a fork in my eye. But even those guys have their place. Just not a place I want to hang out.

Music is my friend because it quiets my brain. It works every time. It stops the wheels from spinning, even if only for a little while. It lets me live in the moment, or it can take me somewhere else if I want it to.

Who knew the devil’s music could do so much good.